I'm trying to progress eternally. Will you be in my down line?

Utah has one of the highest number of Mult-Level Marketing Companies (hereafter referred to as MLM), per capita, in the country.  This leads me to wonder why that may be.  What would be so special about Utah that could allow for this type of company to flourish here?  Well, the first thing that comes to mind is the Mormon Church.  And really, upon a little thought, we don't have to go any further to find our answer.

First, let me discuss MLMs so those of you that don't have an idea of what I'm talking about will be able to grasp the concept.   MLMs are companies that are loosely related to ponzi schemes.  Let me stress that there are many fine upstanding MLM companies here in Utah that are not some kind of scheme and are not fraudulent.  The MLMs are just very reminiscent of a sophisticated con.  An MLM is designed to be like a pyramid.  Obviously the higher you are on the pyramid the more money you make.  You buy products and sell them, and then sign people up under you to buy products and sell them.  You get a portion of the revenue generated by their sells because they are in your down line.  The down line is  the term for all the people that you sponsor in who are below you on the pyramid.  Most legitimate companies will limit the amount of levels that you can go down so that a critical mass of ponziness isn't reached.  Oh, a ponzi scheme is where you invest and I pay you out at a really high percentage, so you get other people to join and they invest and everybody makes money until we can't find another larger group of suckers to invest and the whole thing come crashing down, with the last people (by far the biggest group) getting hosed, and the people at the top of the pyramid walking away with tons of cash, a la Bernie Madoff.

So, with an MLM you work hard to help out the guy above you on the pyramid, as he gets a portion of your sales.  He also mentors you and assists you in knowing what to do and growing you business.  You then turn around and try to find other people that are willing to sign up under you, so they can help your income grow, and you in turn can assist them in learning what they need to know to become a successful vulture.  I mean business man.

So how does any of this correspond in any way, shape or form to the Mormon Church?  Well, surprisingly, this MLM plan just happens to be almost identical to the Mormon Plan of Salvation.  Stay with me here, because this is going to take a little bit of explaining.  I am also going to throw up a nifty little diagram for your viewing pleasure and edification.

The Mormon Plan of Salvation is what gives the church its ability to get people to look past a number of inconsistencies and silly crap.  The Plan basically says that we lived with God before we came to this earth in a spirit form.  God made bodies for us (by telling our fore parents to get busy.  A lot.  And don't worry about that whole sleeping with your sister thing, because I'm God and can fix all the nasty genetic deformities that your inbreeding is going to net you.)  So we come here to the Earth for our trials and tribulations (mostly mosquitoes and obnoxious bosses that won't let you live the dream.)  Then we die.  If we were good, and after a whole millennium of work (please see my previous blog for an more in depth analysis of this plan) we get saved and go and live with God as a family.  The very best of the best of the best, get to become Gods and start the plan all over.  This is what is so enticing about the Mormon Church to converts.  They get in on the ground floor and if they play their cards right, they can go all the way to the owner of the company.  Power, riches and the ability of fry people in righteous holy fire.  Awesome.  So, the question pops into most members minds after a while, Is God still progressing? Which brings us to the chart. 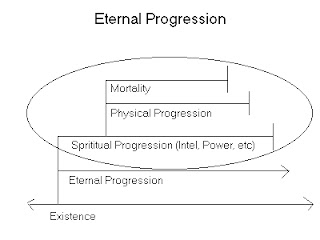 We will start at the bottom of the chart.  Obviously, since God is eternal and all knowing, and you can neither create or destroy matter, we have always existed in some form or other.  Hence the line on the bottom of the diagram is a true line with no beginning or end.  At some point along that line, God made us spirits and gave us spirit bodies.  This was a start to our Eternal Progression.  So, we spent some time in spirit diapers and having spirit poops and then we matured and finally were ready to get a physical body, where we could have real diapers and real poops, but this was for our own good as the experience would teach us the difference between good and evil.  Having changed a few diapers in my day, I can say without a shadow of a doubt that I know what true evil is.  But I digress.  So we go along and then we die.  Eventually, according to Mormon and Christian doctrine, we get resurrected and obtain a new and glorified and immortal body which will be perfect.  If it is perfect then it will have progressed as far as it is possible and we will have reached the end of our physical progression.  No eternal progression on the physical side then.  A perfect body is a perfect body.  It isn't going to get more perfect.  Perfecter?  Whatever.
Well, what about on the spiritual side.  Mormon doctrine teaches that if we are true and faithful we can become Gods and Goddesses.  ( I don't think you get a choice, I think you're stuck in the sex you started out with.  Sorry if you had plans to the contrary)  If you are a god, then you will become all powerful and all knowing.  God can't become more perfect.  So, therefore, after a while you will cease to progress Spiritually also as you will "receive all that the father has."  As you can see from the diagram above, anything in the circle has an end.  So, we have come back to the question of how does Eternal Progression work if on both a spiritual and physical level you reach the top and have no where else to go?
The Eternal MLM is the answer.  In Mormon scripture is says of God that "this is my work and my glory, to bring to pass the immortality and eternal life of man."  This is one of the most important scripture passages in all of Mormondom, because it spells out the mission statement and the compensation plan for the Eternal MLM.  God's work is to make us gods, but it's also his Glory.  Glory my friends, is the currency of the realm. This would explain why God got so ticked at Satan for proposing a different plan at the Council of Heaven.  Satan, according to Mormon teaching, wanted to force everybody to comply with the plan, and make sure they had their down lines in order.  But he wanted the Glory for himself.  He wanted to jump to the head of the pyramid.  Wrong answer snake.  Upon thy belly shalt thou go.  You don't mess with the compensation plan.  And you certainly don't mess with God, who had to work his way through his own world and all the production problems and back ordered blessings and later souls, making sure that he had a healthy down line, just to have some upstart try to take over the company.  No hostile take overs here.  I mean, he was messing with God for God's sake.
So there you have it.  Glory is the currency that is used in the eternities.  God has a bunch of children that he is trying to make Gods.  When that happens, they will still give Glory to him, and in addition, start there own down lines who will worship and give Glory to them and God (I get a little confused, so I will just call him Daddy God, or the only one we know of right now) will still get some residual glory because, as the bible says, the Glory of the Son is the Glory of the Father.  And while this is happening, after this world is done, Daddy God will go out and start another of his own down lines to increase his shares of Glory even more.  Is it any wonder that the Universe is expanding as such a great rate?
Posted by Dino Jesus at 12:56 AM