Judge you, you judging judger!

I haven't written a blog for a while, and for that I truly apologize.  You see, like everybody else, life gets busy and we drift into other pursuits, and to be honest, I just haven't seen anything that would really make DinoJesus roar lately (See my first blog to understand DinoJesus better).  It's all been kinda blah.  That was until recently when the faithful in Utah have reared their ugly head and DinoJesus has once again become attracted to the rotting carrion which the local Shiite Mormons sometimes become.

Let us consume this meal in chronological order.  First, Utah, like many states, has a law called the Utah Clean Air Act, which forbids you from smoking within 25' of a building.  No big deal right?  Of course for the Mormon Taliban, that is not enough.  For you see there is a new bill in the legislature to include hookahs and electronic cigarettes in the law.  How many people have you seen walking around with a large glass hookah to smoke their tobacco?  Is this really a problem?  No, it is not.  However, the idea that people can go into a "Hookah Bar" and smoke drives the righteous crazy.  And since some dork in Hurricane, Utah (Pronounce huricun) is a member of the Utah Legislature, by golly he will fix their wagon.  Nobody goes in to a Hookah Bar and is surprised that people are smoking.  Except, of course, for the Ward Mission Leader who was just going in there looking for a prostitute.  (Don't laugh, I've seen worse.)
Then of course there is the electronic cigarette.  This device delivers nicotine to smokers in a way that they feel like they are smoking.  The only thing that they are breathing out though is water vapor.  I'm not a smoker, but I will let my friend that do smoke do so in my house if they are using "e" cigarettes, because there is NO smoke.  No stench.  No health hazard to me or my dog.  So now the Utah Legislature is basically trying to outlaw clouds.  Water vapor is bad.  They started out by arguing that second hand smoke is bad for the public and people can somewhat get behind that.  Now we see what is really going on.  It isn't a health concern so much as they are trying to outlaw the "appearance of evil."  All anyone has to do to see how this stupidity works is to examine the Utah liquor laws.  Dumb. (See previous blogs for more details)
Now let me move on to the main course of this scavenger's feast.  Utah has made the national news again.  Why you might ask?  Because some supposed christian at BYU decided to be a Judger.  Before I get into the details let me make an aside.  Recently on facebook, the following picture has been going around from all my Mormon acquaintances. 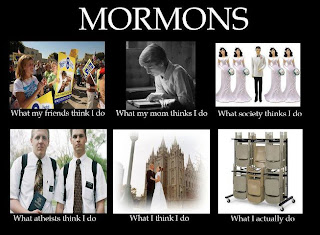 It's kind of witty ﻿in a "you have to be Mormon to get this joke" kind or way.  I only have one problem with it.  In the bottom left corner it shows two missionaries and states that this is the way atheists see Mormons.  I think that is incorrect.  I think the picture below is how atheist (at least this one for sure) see Mormons. 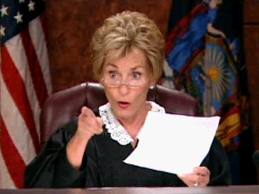 Now to the details.  On Valentine's day, a young woman who attends BYU was studying at one of the buildings on campus.  A young man (Judger!) came up and gave her a note.  She at first thought it was a love note and she thought it was cute.  Oh, but not so fast.  It was a judger note.  Evidently the young harlot was dressed so provocatively that this young christian soldier felt the need to straighten her out in no uncertain terms.  It was done not only for her own good, but to protect the chastity and righteousness of all the other young men (and women) in the nearby vicinity.  Thank DinoJesus this man acted quickly, bravely and selflessly to protect everyone's virtue.  Below is a picture of the note and what the young skank was wearing. 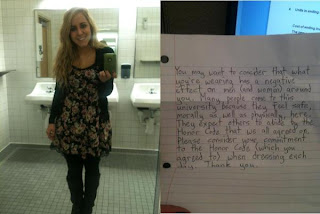 Oh what a foul temptress she is.  You can almost see her wrists for indecency's sake.  In case you can't read the note she was given, I have included the quote for your enjoyment.

"You may want to consider that what you're wearing has a negative effect on men (and women) around you.  Many people come to this university because they feel safe morally as well as physically here.  They expect others to abide by the Honor Code that we all agreed to.  Please consider your commitment to the Honor Code (which you agreed to) when dressing each day.  Thank you."

This very attitude is one of the things that allowed me to start questioning the religion that I was raised in.  Not because I was offended or had sinned, but because I couldn't understand how a church that supposedly was the only true church of Christ on earth could foster such an amazing number of Judgers and create in people the feeling that they are never good enough.  That they never can do enough.  That they must create a facade around them so that other members will think that they are perfect, so that they won't be judged.  When my spouse left the church she stated that the greatest thing that she received (besides an extra day off and a 10% pay raise) was that she no longer had a feeling of guilt or inadequacy.  That she could just be the person she wanted to be in the best way she knew how and be happy.

The Mormon churche's problem isn't the missionaries out in the field.  It is the Judge Dredds back home that stink the place up.  They need to remember that in the last days, all such shall be blasted by the roar of DinoJesus and feel the teeth of righteous anger pierce them to the very core.  So let it be written, so (I would wish) let it be done.