Guilt Free and Loving It!

It has been a while, o ye people of the earth.  Long have been the days since I have chosen to roar at you from on high.  Yea, even though I, DinoJesus, am constantly present and look upon the the inhabitants of the Earth, I have not deigned to pour upon you my wisdom in lo, these many days.  Hear then the words of my faithful servant and prosper from his righteous insights into the workings of man. For lo, the time of the great gnashing of my teeth is at hand, and they whom shall perpetuate in unbelief and who do not know the sharpness of my fangs shall feel my wrath and my bite and shall endure an eternity being digested in the greatness of my belly.

One of the first things my wife mentioned when we "graduated" from religious belief is that she no longer had the overwhelming since of guilt that had been instilled in her from an early age.   She and I can feel bad about our actions and can endeavor to be better spouses, parents, neighbors, friends and citizens without having to feel the crushing guilt of never being good enough.  We can live our lives to the best of our ability and not have to worry if it was enough.  We can do good things for the sake of doing good without having to make sure that we are getting "credit" from other people who need to see us being good.  Most importantly, we can concentrate on the people who really matter in our lives and not have to spend so much time trying to impress the people we go to church with so they will think that we are doing the right things.

A buddy of mine recently called me to vent about his ex-wife.  He was complaining because she was basically neglecting his kids (who live with her most of the time) because she was spending so much time at church being the perfect church goer.  She would spend hours with the youth at church because that was her duty, but then not want to go to any of her children's activities because she was tired, and it wouldn't get here any credit with the people at church.  That attitude used to drive me crazy.

I can remember so many times that I would get asked to go and help someone in the church with moving or yard work or any number of other things, because the man of the house wasn't around because he was too busy with his church calling.  He would neglect his family and rely on the assistance of others so that he could spend 20-30 hours a week performing his church calling.  What a crock of crap.  It is the same mentality which has men who are in dead end jobs not going back to school to get the education they need to get a better job to better be able to support the gaggle of children they have because with their "important" church calling they have no time at night to go back to school.  So they schlep around making $30,000 a year with 4 kids all the while hating it, but knowing that it is just the Lord testing them and if they are faithful enough they will eventually be blessed.

So, when I finally saw the light, not only did I get a 10% raise and an extra day off, but I saved hours each week not having to feel guilty because I wasn't doing something more for the church.  I also gained the freedom to be able to do whatever I like without feeling guilty or judged.  I even got a few tattoos.  They are awesome.  Below is the most recent and I have to tell you that I really like it. 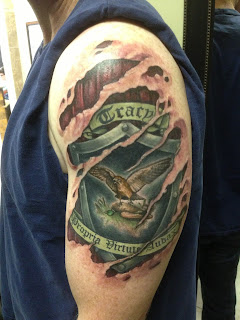 I guess what I am trying to say is that you need to live your life.  You only get one.  Be a moral person for its own sake and not because you are afraid of being punished by the great sky daddy after you die.  Make your mistakes and live your life and learn how to have fun.  In the immortal words of Obi Wan Kenobi, "Let go!"  Let go of the guilt and feelings of inadequacy.  Let go of your envy of the lady across the street and her "perfect" life.  She is just like you. She is only better and building and maintaining the facade that makes people like you think she has her shit together.  Life isn't fair, but for the most part it's not out to get you either.  The law of averages will work your way if you work hard enough and concentrate on taking care of business.  Maybe you fail, but as long as you try your best, and live your life to the fullest, you aren't a failure and you have nothing to be ashamed about.
Posted by Dino Jesus at 2:11 AM